New Publication: Houses of the Dead? 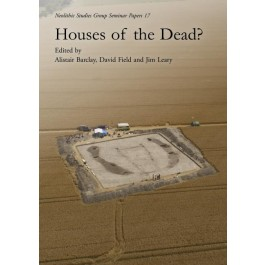 Houses of the Dead? edited by Alistair Barclay; David Field; and Jim Leary

Despite the chronological disjuncture, linearbandkeramik longhouses have widely been considered to provide ancestral influence for both rectangular and trapezoidal long barrows and cairns, but with the discovery and excavation of more houses in recent times is it possible to observe evidence of more contemporary inspiration? What do the features found beneath long mounds tell us about this and to what extent do they represent domestic structures? Indeed, how can we distinguish between domestic houses or halls and those that may have been constructed for ritual purposes or ended up beneath mounds? Do so called ‘mortuary enclosures’ reflect ritual or domestic architecture and did side ditches always provide material for a mound or for building construction? This collection of papers seeks to explore the interface between structures often considered to be those of the living with those for the dead.

Among the many fascinating chapters, it has a chapter by Jim Leary and colleagues on the Cat's Brain site (Schrödinger’s Cat: Houses for the living and the dead), and another on the dead and the Linearbandkeramik longhouse by Penny Bickle.