Article in Science is unprecedented study spanning 150 years and thousands of miles, reveals the genetic basis for the animal's fightback against the deadly myxoma virus 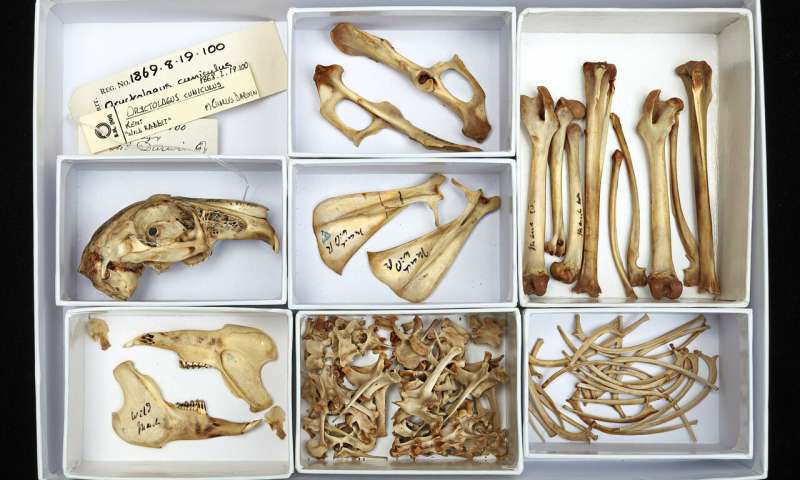 Dr Nathan Wales is a co-author on a newly published article in Science, Parallel adaptation of rabbit populations to myxoma virus. From the abstract:

In the 1950s the myxoma virus was released into European rabbit populations in Australia and Europe, decimating populations and resulting in the rapid evolution of resistance. We investigated the genetic basis of resistance by comparing the exomes of rabbits collected before and after the pandemic. We found a strong pattern of parallel evolution, with selection on standing genetic variation favoring the same alleles in Australia, France and the United Kingdom. Many of these changes occurred in immunity-related genes, supporting a polygenic basis of resistance. We experimentally validated the role of several genes in viral replication and showed that selection acting on an interferon protein has increased its antiviral effect.

From the Phys.org article:

The team collected historical samples from 11 natural history museums in the UK, France, Australia and the United States. One of the rabbits from which DNA was sequenced belonged to Charles Darwin and is now housed in London's Natural History Museum (images attached). Joel Alves said: "It wasn't easy to get samples from so many long-dead rabbits. Not all natural history museums keep rabbits because they are not very exotic compared to other species. But the museums we worked with have done a great job of keeping their specimens well preserved for decades. This and the availability of new technology gave us a unique opportunity."

At a time when rabbit populations are collapsing across the UK and mainland Europe, this research may provide clues to the animal's future. The team found that the protein that helps rabbits fend off the myxoma virus also has an antiviral effect on an unrelated virus called vesicular stomatitis. Miguel Carneiro, from CIBIO, University of Porto, said: "While battling myxoma, rabbits may have increased their resistance to other viruses including, perhaps, rabbit haemorrhagic disease which is killing so many animals right now."

Meanwhile, myxoma remains a serious threat to rabbits. Joel Alves said: "Viral evolution appears to be finding ways to counter the genetic adaptations which we've observed. Recent, more virulent recent strains of myxoma virus, have been found to be extremely immunosuppressive. So the arms race goes on."