New research suggests a population of red squirrels on the Lancashire coast may have developed weaker bites after snacking on peanuts. 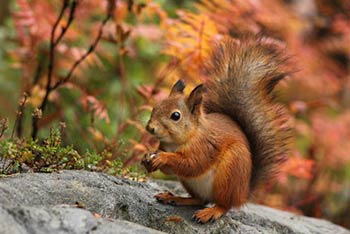 The researchers suggest that the changes in bite strength of the squirrels in Formby could have been brought about by their softer diets, reducing their ability to gnaw through the tough-to-crack nuts they eat naturally – such as pine cone seeds, hazelnuts and beech nuts.

The findings have important implications for conservation efforts for red squirrels, which were once widespread across mainland Britain. They have suffered severe population decline from the 1920s onwards due to a loss of woodland as well as viruses and competition from grey squirrels.

The researchers, from the University of York and National Museums Scotland, compared the lower jaws of red squirrels from surviving population pockets in the UK (which are mainly in northern areas and on offshore islands) as well as a sample from central Europe.

Their analysis has indicated that Formby squirrels, which are managed by the National Trust and the Lancashire Wildlife Trust, appear to have a less efficient temporalis muscle than all the other red squirrel populations. In rodents this muscle is used for rapid closing of the jaws to generate a powerful bite force.

Dr Philip Cox from the Department of Archaeology and the Hull York Medical School at the University of York, said: “We found that the shape and function of the lower jaws of the Formby squirrels were different from all of the other red squirrel populations we looked at.

“They are the only group of red squirrels in the study that were given supplementary food and it is possible that the changes to their jaws have been brought about by diet.

“Many mammals- and especially rodents- have the capacity to evolve at very fast rates under changing environmental conditions. The changes to the gnawing ability of Formby squirrels could be an evolutionary response which has occurred over a few generations of squirrels or it could be an adaptive response which occurs over the lifetime of individual squirrels exposed to supplementary feeding.”

The researchers looked at 260 lower jaws of red squirrels held in the collections of National Museums Scotland. The jaws were from a range of different populations in the UK - including the Isle of Wight, Jersey, parts of Scotland, Northumberland and Cumbria – as well as a sample from Germany.


A virtual reconstruction of a red squirrel jaw made from a microCT scan.

The specimens in the study were mostly collected in the 1990s and early 2000s when feeding squirrels with peanuts at Formby was very common. In recent years, the National Trust has been reducing the amount of peanuts given to the Formby squirrels and communicating with visitors that supplementary feeding of squirrels is unnecessary.

The results of the study, which will be presented at the Mammal Society 65th Spring Conference from 30 to 31 March, 2019, have important implications for efforts to protect red squirrel populations.

Dr Cox added: “Efforts to conserve the red squirrel population at Formby have been really successful, but there may have been an unsuspected impact on the form and structure of parts of their skeletons as a result of their diets being supplemented by less mechanically demanding food.

“This could suggest that members of the public should exercise caution with the types of foods they place in garden feeders for red squirrels.

“There are additional implications for conservation strategies that involve moving red squirrels around to boost and genetically diversify populations, as some squirrels which are used to supplementary feeding may struggle to thrive.”

The researchers say that further studies looking at genetic data as well as more data from the skulls and jaws of different squirrel populations are now needed to confirm the findings of the study.

Co-author of the study, Dr Andrew Kitchener from National Museums Scotland, said: “This is an important study which shows how the use of museum collections is vital for investigating the problems faced by endangered species and offers new insights into how to support future conservation efforts, in this case for the red squirrel”.