Experts in archaeology, music, history, history of art, and medieval studies at the University of York give their reactions to the Notre Dame Cathedral fire in Paris. 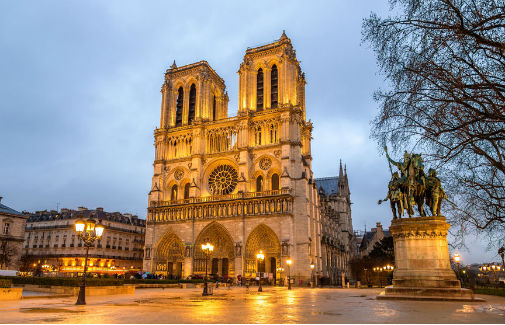 Dr Kate Giles, from the University of York's Department of Archaeology, said: "Historic buildings are no strangers to fires, especially when building or restoration work is underway.

"A cathedral like York Minster has experienced a series of devastating fires, not just in 1984 when the South Transept was destroyed by lightning, but in 1840 when a candle was left burning by a clockmaker carrying our repairs in the South West Tower and the nave roof burned, and in 1829, when the choir was deliberately set slight, with similarly devastating consequences.

"Disasters such as this have a huge impact not only on those who work and worship in a church, but also the wider community for whom the building is a symbol of identity and something far harder to capture, linking people to a deep sense of the past and to a sense of spirituality, whether they are religious or not.

"We saw last night how local residents, visitors and the international community shared a sense of anguish at the fate of this internationally-significant Gothic building.

"But cathedrals have a millennium of expertise behind them, and Notre Dame will be able to draw on colleagues from across the world, including the University of York's Art History and Archaeology departments and York Minster's Glaziers' Trust and Stoneyard, to assist with its rebuilding and restoration.

"Early phases of the work will include assessment of the structural stability of the surviving masonry and the archaeological recording of surviving fragments of timber, stone and artworks.

"This will enable the Notre Dame team to salvage what can be re-used and provide crucial evidence for the design of new fabric in the building. The restoration designs are likely to be the subject of debate.

"Should Notre Dame be reconstructed as it was on the eve of the fire, including elements of later schemes of restoration and repair, or should new architectural details be included, creating a lasting legacy of the craftsmanship of the 21st century?

"As at York and Windsor, the fire may well reveal new secrets about the medieval cathedral, so the involvement of experts at this early stage of the project will be crucial.

"One thing is certain from the York experience. A disaster such as this has the potential to bring communities together in new ways, providing opportunities for community cohesion and training the next generation of engineers, craftspeople and scholars who will continue to care for these buildings in the future. And perhaps that will be the lasting legacy of the Notre Dame fire."

Dr Emma Wells, from the University of York’s Centre for Lifelong Learning, said: “Notre Dame de Paris is a touchstone of not only France’s but Europe’s history.

“Crusaders prayed here before leaving on their holy wars; polyphonic music developed within its walls; Mary Queen of Scots married here; Napoleon Bonaparte and Josephine were crowned here; and it was pillaged during the French revolution. And these are just a handful of the cultural-historic events.

“In architectural terms, it is an icon of the Gothic style - a giant exemplar showcasing some of the most innovative techniques of the 12th and 13th century.

“It was the first cathedral to feature four storeys thereby requiring the vast 15 metre flying buttresses as well as the innovation we know as the rib vault.

“Together these helped to support the roof and walls, but above all, they allowed for modernity; for the Gothic style, with its cage-like stone structures which replaced the heavy Romanesque columnar buildings of the previous centuries.  The walls could be filled with vast stained glass windows, allowing the stories of the bible to be conveyed to all. These were literal representations of Heaven on Earth.

“Our cathedrals are stone phoenixes - reminders that out of adversity we may be reborn. And from the ashes they may be recreated, renovated, altered and changed as they have been over the centuries by hundreds, even thousands, of men and women into the cultural and heritage icons we know and love today. They will resurrect.”

Professor Tim Ayers, at the University of York’s Department of History of Art, said: “In the history of architecture, Notre Dame is famous for its great stone vaults, rising over 100 feet, and supported by flying buttresses.

“This was one of the most impressive achievements of early Gothic architecture, a prodigious feat of engineering, built to the glory of God. But stone vaults were also partly a response to the danger of fire in wood roofs.

“York Minster has lost three of its four medieval wood roofs to fire. It remains to be seen how well the Notre Dame vaults have done their job, but preliminary pictures suggest that they have survived, at least in part, protecting the interior.”

Dr Jez Wells, from the University of York’s Department of Music, said: “I remember when first working as a recording engineer, capturing chant in Notre Dame Cathedral and noting its incredible reverberation.  The building's reverberation, its own response to sounds made within it, is so strong and rich that it really seemed as if the ghosts of its past were coming out of the walls and singing along.

"It was a light bulb moment in my appreciation and grasp of sound and recording. The fire damage to the roof of the building means that it can no longer make those same responses to sound that it has been making for over 800 years, which is tragic indeed.

"Sound reverberation could be considered a niche topic, but when you listen to the sounds that Notre Dame makes, you realise the power in its audible rendition of space, geometry, fabric and time.

"It is literally the sound that a building makes in concert with its occupants, a sound that it has been making for a very long time. That capability is now profoundly altered, but hopefully not permanently."

Dr Geoff Cubitt, from the University of York’s Department of History, said: “Situated on the Île de la Cité in the historic heart of Paris, the Cathedral of Notre-Dame has been a key feature on the Parisian skyline since the thirteenth century, when its great twin towers and famous windows were first constructed.

"The spire, the most conspicuous casualty of yesterday’s fire, is a nineteenth-century addition by Viollet-le-Duc, replacing an earlier spire demolished in the eighteenth century.

“Besides its architectural beauties, and spiritual significance as the city’s prime historic site of Christian worship, the Cathedral has long established itself as a visual icon of Parisian identity, rivalling the late nineteenth century Eiffel Tower in the visual imaginations of tourists and Parisians alike.

“The fact that, despite depredations during the Revolutionary period, the church has retained its dominant form across the centuries, has made Notre-Dame a kind of emblem of endurance and continuity across the city’s – and France’s – turbulent history.

“The sight of the cathedral in flames, and the devastating damage done, can only have a profound emotional impact, though it is still too early to tell just how far the damage extends, and what the future will hold.”

Professor Sarah Rees Jones, Director of the Centre for Medieval Studies at the University of York, said: “The cathedral of Notre Dame is a monument to the creativity and ambition of medieval artists and craftsmen and is one of the most perfect expressions of new styles of gothic architecture developing across Europe in the thirteenth and fourteenth centuries.

“The continuing appeal of medieval cathedrals, such as Notre Dame, to modern visitors and tourists today is powerful evidence of the importance of deep history even as cities and societies constantly change.

“The cathedral of Notre Dame contains unique relics and art works from the medieval period – and it is a great relief to hear that not all are lost.”

Luke Giraudet, PhD student, at the University of York’s Centre for Medieval Studies, said: "Since the thirteenth century Notre-Dame has stood at the heart of Paris as an enduring and empowering symbol of the city’s identity.

“The iconic Gothic monument has borne witness to key moments in France’s turbulent history and its permanence, despite the risks of Revolution and war, encapsulates the city's own resilience and unity over time.

"Besides its awe-inspiring appearance, the cathedral is home to many invaluable medieval artefacts and relics, not least of them the Crown of Thorns brought to the city by Louis IX in 1239. While it is a great relief to hear that these have been rescued, it remains to be seen what damage will have been inflicted upon more substantial treasures, such as the wonderfully sculpted fourteenth-century choir screen.

"The sight of Notre-Dame in flames has rocked France and provoked an immediate and profound emotional response consonant with its historical importance. The support offered from around the world in response to this tragedy is a magnificent testament to the continuing place that medieval history and architecture hold in our modern cities."