Archaeologists at the University of York have uncovered evidence of a late 17th Century Army barracks at Jersey's Elizabeth Castle, as well as a rare brass button from an Army officer’s uniform.

Elizabeth Castle is a complex site with origins as a defensive island fortress in the 16th Century, which was later occupied by the German army during the Second World War.

The team of archaeologists, working with Jersey Heritage, aim to discover the location of the barracks blocks and uncover more about the people that used the building.

After a week of excavations, they have already found structural evidence of the barracks, included walls and a cobbled floor, and a more contemporary door key.

Dr Catriona Cooper, from the University of York’s Department of Archaeology, said: “The Board of Ordnance was a government body established in the Tudor period to act primarily as custodians to the areas required in defence of the country.

“It is exciting to find this button, because there would have only been one officer that wore this uniform at Elizabeth Castle.  He would have had oversight of the castle’s defences and its army supplies, such as weaponry.” 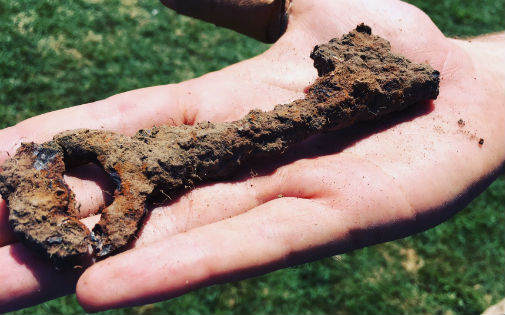 The team also found a key at the site, thought to be contemporary to the site

Using data produced by an archives team at the University of York and Jersey Archive, the archaeologists were able to identify four key areas where trenches could be created for the search for artefacts and potential evidence of the original structure of the site.

Archaeologists are also investigating an early 19th Century hospital block, utilising digital visualisation techniques, to produce a better understanding of the make-up of the building.  It is hoped that the completed work will assist Jersey Heritage to enhance the visitor experience to the site.

Dr Cooper said: “We have also uncovered a comb, tokens and coins, as well as lots of clay pipes ceramics and building materials.  The aim will be to open these finds up to the public and reveal more about the life at the hospital and barracks sites to allow for a clearer window into the past of this fascinating castle site.”

The project is the first year in what is hoped to be an ongoing collaboration with Jersey Heritage.

The research at the University of York's Department of Archaeology with Dr Catriona Cooper and Project Directors Dr Dave Smith and Dr Matt Jenkins, is supported by Jersey Heritage.