Tim Sutherland organised the Year 7 project at the Steiner School 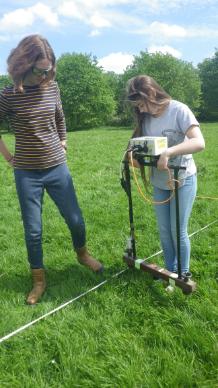 In the beginning of May 2018 Tim Sutherland, an archaeologist and lecturer at the University of York, and father of one of the class 7 children in the Rudolf Steiner School in York, organised and supervised an archaeology project with the 7 class pupils so they they could gain a better understanding of how archaeology can be used to study their local environment.

The project was based upon the land on which the school had been built and how it had changed over the past couple of hundred years, since some of the eary maps of the area had been drawn. For a few hours each week Tim taught the class various aspects of archaeology, from archive research and building recording, to finds analysis. This ultimately led to a two day excavation of a small archaeological trench untertaken by the 22 children of Class 7. The children each wrote about the project from their own experiences and in their own fashion, using photography, diaries or other form of expression. They learnt about one of York's earliest railways, which was researched further during a trip to the National Railway Museum, York, how gravel was extracted from gravel pits that once existed on the land prior to the schools construction, and how this gravel was transported down to the river and into barges. Two unrecorded sunken barges were also located close to the former jetty. 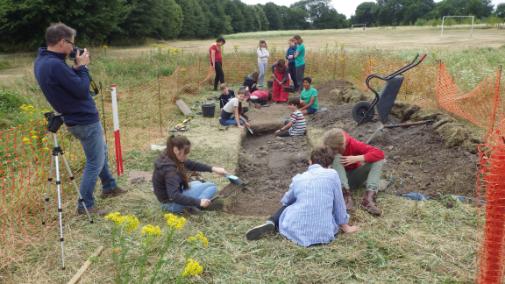 The investigation of geological maps explained how the gravel got there due to its movement in meltwaters following glaciation. All of this explained why the school had been built on so many different levels as it sat in the base of the former gravel quarry. In the period between and including the First and Second World War, the former gravel quarries were used as allotments to subsidise food production until the school was built in 1954. The school was formerly called Danesmead and took its name from the flood planes that bordered the river at Fulford. It is tempting to think that this name derives from the use of the land during the 1066 Battle of Fulford when the vikings army flanked the river before using the ford to cross it, beat the English army and enter York.

The archaeological project now has its own website which was produced and written by Tim and will eventually incorporate some of the work by the pupils. Tim said: "Having taught archaeology students of different capabilities and ages, it is refreshing to know that tweleve to thirteen year old school pupils can successfully undertake tasks such as geophysical survey and other types of field work and still see the bigger picture. I was amazed at how competent they were."