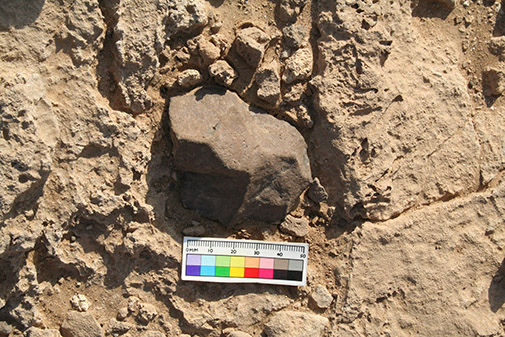 In 2015, a Saudi-UK team of archaeologists observed basalt stone tools lying on the surface of a massive expanse of tufa in a basin upstream of Wadi Dabsa, Asir Province, southwestern Saudi Arabia. Formed by the flowing and ponding of water during a period in the past, the area yielded over 1,000 artefacts.

Further investigations in 2017, increased the assemblage to almost 3,000 artefacts, both Lower (1.8 million to 300,00 years) and Middle Palaeolithic (300-40,000 years ago) in character, making it one of the richest localities recorded to date in the region, and offering an unprecedented opportunity to examine hominin activity in its environmental setting.

This exhibition presents images from the investigations at Wadi Dabsa, where UK and Saudi archaeologists are piecing together the changing landscape of the Wadi Dabsa basin, the place of the artefacts within it, and its implications for hominin behaviour and the first dispersals from Africa.

The exhibition is on display in the King's Manor Common Room, open to the public from 9am to 5pm Monday-Saturday, until September 2018. This exhibition was staged through the generous funding from the British Foundation for the Study of Arabia.

More about the team's work in Saudi Arabia can be found at: https://surfaceproject.wordpress.com/