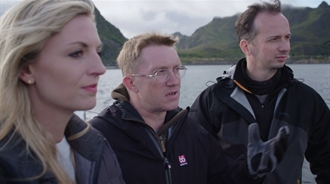 Maude Hirst, Neil Price and Steve on the ferry in Borg

Following successful airings in the US and around the world, The Real Vikings comes to History UK on Tuesday 20 February. Steve's episode, which is set in arctic Norway, airs on Tuesday 27 February.

The show features archaeologists and historians alongside members of the cast of the Vikings TV drama; Steve's episode features Maude Hirst, who plays 'Helga' in the show. The series has also just been nominated for a Canadian Screen Award.

The Real Vikings follows a successful web-based series, Secrets of the Vikings, which Steve was also involved in. The show is available on YouTube.

Keep an eye out for further staff TV appearances on the subject of Vikings!