Professor Matthew Collins has collaborated with a group of international researchers to provide consistency to the field of palaeoproteomics. 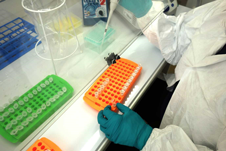 Professor Collins, of BioArch, has joined a team of researchers from several of the top universities and institutes in the field, including the Max Planck Institute for the Science of Human History, to collaboratively produce a set of guidelines.

Palaeoproteomics, the cutting-edge techniques to analyse ancient proteins, has jumped into the spotlight in recent years. Preserving ten times longer than DNA, ancient proteins offer scientists a unique glimpse into the distant past. New technologies have made this work increasingly powerful, and its results increasingly detailed.

Scientists can now use trace amounts of archaeological proteins to reconstruct the relationships of extinct megafauna, track the spread of dairying in prehistory, and characterize immune responses in people who died thousands of years ago. This has allowed researchers to better answer a range of questions, from the evolution of extinct species to the reconstruction of past human diets, to a better understanding of chronic diseases.

As a young discipline, palaeoproteomics faces many of the same obstacles that once challenged the field of ancient DNA, namely a lack of consistency in data reporting standards, authentication measures, and procedures taken to avoid contamination. Without rigorous standards, lab contamination and data artefacts can be easily misinterpreted, leading to false claims. In this publication, the authors set forth a number of “best practices” for the sampling, generation, analysis, and reporting of ancient protein sequence data in the scientific literature in order to support researchers, reviewers and editors.

The authors emphasize that they do not intend to create rigid, unbendable rules, or to overturn existing standards, but rather to consolidate and strengthen the field’s best practices. “Undoubtedly, as new laboratory and statistical strategies for characterizing proteins emerge, these guidelines will require debate within the community and further update,” states co-lead author Frido Welker, of the Max Planck Institute for Evolutionary Anthropology. “However, we hope that the standards of practice presented here will help to provide a firm foundation for palaeoproteomics as a technique for use in a variety of fields.”

The researchers stress that publications must, at a minimum, provide adequate details on how data were generated and authenticated so that others can effectively evaluate the results. “Palaeoproteomics holds enormous potential to dramatically expand archaeological, palaeontological and evolutionary research,” explains co-lead author Jessica Hendy, of the Max Planck Institute for the Science of Human History. “It is crucial that the discipline holds itself to high standards in order to ensure that it is able to meet this potential.”

The guide has been published by Nature Ecology & Evolution.