A team led by archaeologists from York, Berlin, and Buffalo, New York has published new radiocarbon dates that change the story of the end of the world-famous early farming site in Turkey 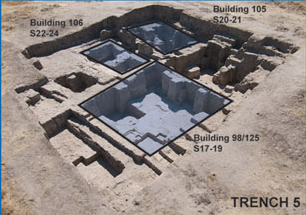 The Neolithic village of Çatalhöyük is famous for the densely packed houses, rich symbolic tradition, and long-running, cutting-edge excavations on its East Mound led by Ian Hodder. Çatalhöyük East was occupied for over a millennium before being abandoned just after 6000 BC, an event that some have attributed to rapid climate change.

Just 200 metres away across a now-dry river course, the less well-known Çatalhöyük West Mound has usually been seen as a separate, later settlement, founded after the abandonment of the East Mound. But the new dates, based on smaller-scale excavations by two teams who joined forces for this paper, reveal that occupation on the two mounds overlapped, perhaps for upwards of two centuries.

Lead author Dr David Orton from York's Department of Archaeology said: "We'd been starting to think there was an overlap for a while, but these dates clinched it: Çatalhöyük East and West were a single settlement, which shifted gradually, probably over a matter of centuries. There was no abandonment at 6000 BC".

Does this rule out the climate-change theory? "Not necessarily. A shift starting at maybe 6200 BC would actually fit the climatic data rather better. But we're certainly not talking about a catastrophic event".

"What I find most interesting is that the latest known structures at Çatalhöyük East were burial chambers, while we've yet to find any adult burials on the West Mound. Were the last people buried on Çatalhöyük East actually residents of Çatalhöyük West? It seems likely."