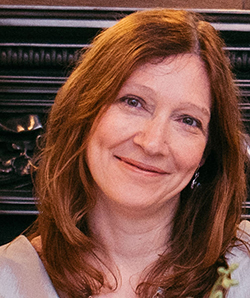 The appointment is part of the University’s Research Leaders programme announced by the Vice-Chancellor in 2016.

Professor John Schofield, Head of Archaeology at York, says: "This is a tremendous appointment for us. Dawn comes with an exceptional track record in early medieval archaeology, a subject where we have traditionally been strong. This appointment adds significant strength in that area, but also in others, including digital applications. Its a great match and we are delighted".

Dawn is a medieval archaeologist and historian, with a particular interest in ethnicity, gender and childhood, and she has a long track-record of research on the Vikings.

Her books include The Northern Danelaw: its social structure, c.800-1100, and The Vikings in England; settlement, society and culture. She has also edited several volumes including: Masculinity in Medieval Europe; Cultures in Contact: Scandinavian Settlement in England in the ninth and tenth centuries; The Archaeology of the Eleventh Century: Continuities and Transformations; and the forthcoming Oxford Handbook of the Archaeology of Childhood.

She is co-director, with Julian Richards from York, of the Viking Winter Camp at Torksey project. Dawn and Julian are writing a book on the Viking Great Army, and have worked with colleagues from Digital Creativity Labs (DC Labs) and the Department of Theatre, Film and Television (TFTV) on the award-winning Viking Virtual Reality project that featured in the 2017 Viking: Rediscover the Legend exhibition at the Yorkshire Museum.

In recent years her external engagement activities have focussed on Sheffield’s medieval castle and hunting lodge and their legacy for the city, leading to her collaborations with local theatre companies to relate this history to the public. She is Principal Investigator on a current Arts and Humanities Research Council (AHRC)-funded project on the use of digital methods to harness heritage to inform urban regeneration, working with her colleagues in Computer Science and Architecture at Sheffield.

Dawn says: "I am delighted to be joining the Department of Archaeology in York, and keen to maintain, and expand, my research collaborations across the White Rose Universities. I look forward to contributing to the ongoing success of medieval studies in York".