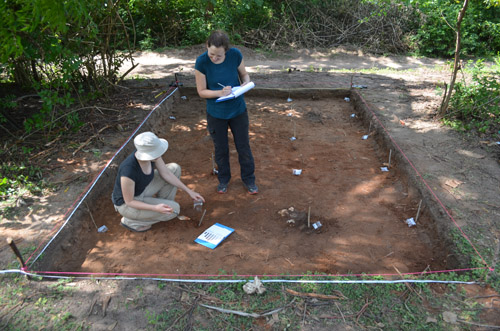 Excavations during June 2017 have for the first time uncovered a domestic structure at the important site of Unguja Ukuu on Zanzibar. The house structures, dating to the 7th or 8th century CE, were built of wattle and daub, and excavations have shown a succession of packed earth floors representing multiple re-buildings.
The houses at Unguja Ukuu were excavated by a team led by Dr Stephanie Wynne-Jones of the University of York, and Dr Federica Sulas, Centre for Urban Network Evolutions (Urbnet), Aarhus University. Excavations are part of a long-term collaboration between York and Aarhus as part of the Urbnet 'Centre of Excellence', funded by the Danish National Research Foundation. The collaborative research is designed to create a new 'high-resolution' archaeology, using geoarchaeological, archaeobotanical, and chronometric techniques to pin down detail about past urban life. In addition, detailed laboratory analysis on artefacts will add data on craft and industry at developing towns in the region.
Crucially, the excavations are focusing on context, and the excavation of domestic structures means that it is possible to think about how urban life was integrated into a resource landscape, tying those resources to particular places and practices. The team was delighted to have located and excavated a house during this initial pilot phase of excavations, which we hope will be expanded on during a longer season next year.