An innovative project has won an award at the York Culture Awards 2017.

VikingVR, a collaboration between Digital Creativity Labs and York Museums Trust, took home the prize for the Excellence in Media Arts category. Professor Julian Richards, from the Department of Archaeology, Dr Gareth Beale and Dr. Nicole Beale from York's  Centre for Digital Heritage, were part of an interdisciplinary team that developed a specially-designed virtual reality mask to re-create the sights and sounds of a Viking army camp.

Working with the Yorkshire Museum’s digital team, academics from the departments of Archaeology, Electronic Engineering and Theatre Film and Television created immersive views of life on the camp, including ships being repaired on the shore, Vikings melting down stolen loot and playing games, manufacturing and trading. VikingVR was part of the Viking:Rediscover the Legend exhibition at the Yorkshire Museum from May-November this year. 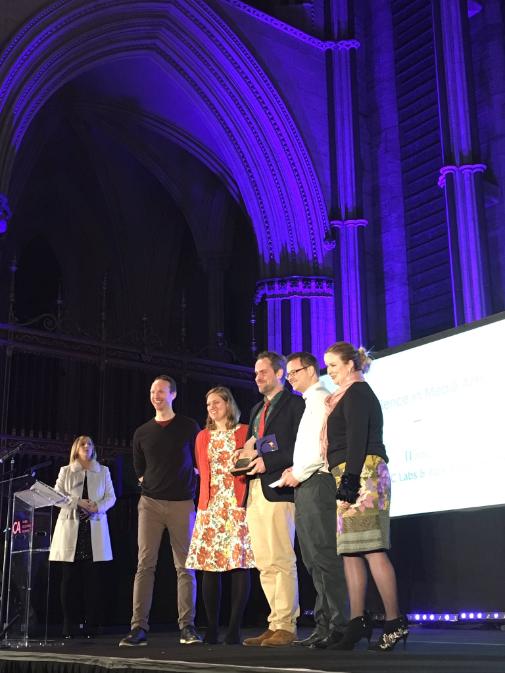 Members of the team pick up the award for the Excellence in Media Arts at the York Culture Awards (credit: Make it York)

Read news about the awards at Minster FM: https://www.minsterfm.com/news/local/2437568/york-culture-awards-2017-winners-revealed/

More about the awards at YorkMix: https://www.yorkmix.com/entertainment/music-man-joe-coates-leads-honours-york-culture-awards-2017/