York researcher publishes new paper on the stratigraphy of the Haua Fteah, Libya 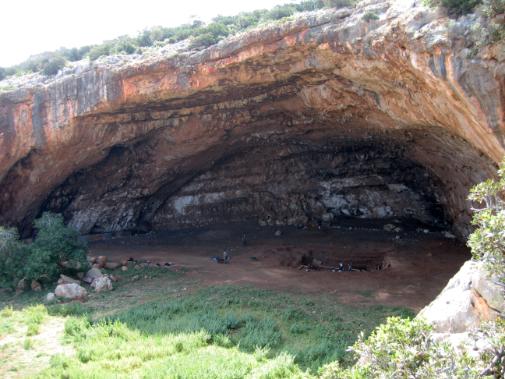 Dr Robyn Inglis has led a new publication on the stratigraphy of the Haua Fteah, Libya, the foremost North African cultural sequence that covers the last glacial cycle.

The Haua Fteah Cave, in Cyrenaica, Libya, contains over 130,000 years of archaeological stratigraphy, from the Palaeolithic Pre-Aurignacian to the modern day, and is the cornerstone cultural sequence for North African archaeology. Its deposits offer the potential for unravelling insights into human-environment interactions, including during the major behavioural changes that accompanied the Middle-Later Stone Age transition 50,000 years BP, but, like all archaeological sequences, the artefact assemblages from each layer are shaped by the way deposits were laid down at the site.

The paper, published in Geoarchaeology and arising from Robyn’s AHRC-funded doctoral research linked to the ERC-funded TRANS-NAP project at the universities of Cambridge, Birkbeck, and Queen’s Belfast, combines sediment micromorphology with bulk sedimentology and field observations to provide a high-resolution examination of the stratigraphic sequence and the processes that formed it. In tracing the changing energies and sources of the sediments that contain the archaeological artefacts, she identified sporadic mass movements and high-energy reworking in the layers corresponding to the MSA/LSA transition. This study highlighted the importance of geoarchaeological analyses of cultural sequences to fully unravel the limitations and potential of the archaeological and paleoenvironmental records they contain.