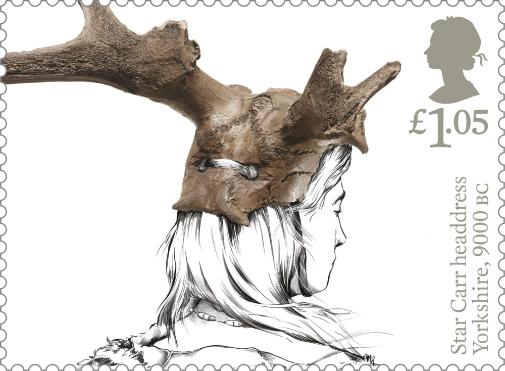 Star Carr has been included as part of the Royal Mail's 2017 Ancient Britain Special Stamps collection, alongside iconic archaeological sites such as Skara Brae and Avebury.

The stamps, illustrated with images that reveal how our ancestors lived and worked, feature outstanding sites and exceptional artefacts that demonstrate Britain's rich prehistory. Star Carr has been represented using an illustration of one of the antler frontlets depicted as it may have been worn.

The launch of the stamps coincides with a new exhibition at the Yorkshire Museum, Ritual or Disguise: The Star Carr Headdresses. Displayed to the public for the first time, the exhibition will feature four 11,000 year old headdresses alongside new research by academics from the University of York.

Star Carr is a Mesolithic (Middle Stone Age) archaeological site, dating to around 9000 BC. It became famous for the extremely well preserved remains discovered in the waterlogged peat environment. The POSTGLACIAL project, based at the Archaeology department, carried out investigations at the site until 2015.

Professor Nicky Milner, Lecturer in York’s Department of Archaeology and Co-Director of the excavations at Star Carr, said: "These headdresses are incredibly rare—Star Carr is the only site in Britain where they have been found and only three other examples are known from Europe.

“I am thrilled that a headdress is going to appear on a stamp. I am also very excited that some of our recently excavated examples are going on display in the Yorkshire Museum. It will give the public an opportunity to see these amazing and mysterious objects and think about how our ancestors might have used them 11,000 years ago."

For more information about Star Carr, visit the POSTGLACIAL project website at http://starcarr.com/

Ritual or Disguise: The Star Carr Headdresses opens from January 17 at the Yorkshire Museum. For more information, visit: http://www.yorkshiremuseum.org.uk/exhibition/ritual-or-disguise-the-star-carr-headdresses/