Analysis of ochre artefacts from Flixton 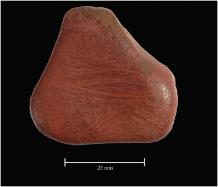 A Team of York researchers have contributed to a paper analysing a rare set of ochre artefacts from the British Mesolithic.
Andy Needham, , Roland Kröger, Harry Robson, and Charlotte Rowley were part of the team that the objects, found from sites surrounding palaeo-lake Flixton, North Yorkshire, UK. The landscape is home to some of the most famous Mesolithic sites in Europe, including Seamer Carr and Star Carr.
The artefacts include an ochre crayon, likely used to apply colour and faceted from use, and a pebble with a heavily striated surface, likely scraped to produce a red pigment powder. Together, they hint at a diverse range of techniques for producing and using colourants at palaeo-lake Flixton, and perhaps during the British Mesolithic more generally.
The artefacts were analysed using micro-raman, a technique that can asses the chemical composition of a sample with very high precision, confirming they were red ochre. The team hopes to be able to use this powerful technique in the future to analyse the specific chemical composition of nearby ochre sources to identify possible locations targeted during the Mesolithic. If successful, this may offer a new way to reconstruct mobility patterns and raw material transport patterns during the Mesolithic.