A team of archaeologists hope to discover the lost Roman Amphitheatre 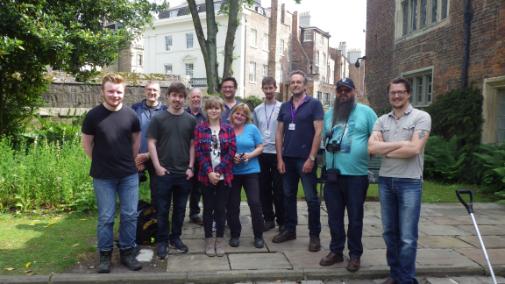 A geophysical survey has been carried out at the Department's campus at the King's Manor.

On Saturday 3 June, Tim Sutherland of the University of York was joined by former Time Team presenter Stewart Ainsworth from the University of Chester, Graham Attwood from Magnitude Surveys Ltd, Mitchell Pollington, Principal Archaeologist with Lanpro, and a group of archaeology students, in the hunt for the Roman Amphitheatre.

The front lawn was surveyed using earth resistance kit and was carried out by students assisting members of the public ranging from a few years of age to those in retirement. The front lawn, the drive along the front of the main building and a cross-section from the art gallery to the fence by St Mary's Abbey was surveyed using GPR by Graham and assisted by the archaeology students.

The results will be published once they have been processed. The hope is that this work can be expanded upon in the future to cover more of the ground in and around King's Manor in an attempt to discover what caused the subsidence under a significant portion of the King's Manor structures.

Tim's thanks go to all the companies involved, the volunteers - both student and members of the public - who made the survey work such a memorable part of the York Roman Festival, which was organised by the York's Museum Trust (YMT).