Exhibit: Feast around the cooking pot with builders of Stonehenge

Elaborate cooking pots used by the builders of Stonehenge in special feasts and ceremonies, are just some of the items on display at a new English Heritage exhibition revealing the diet of the prehistoric community that built the ancient monument 4,500 years ago. 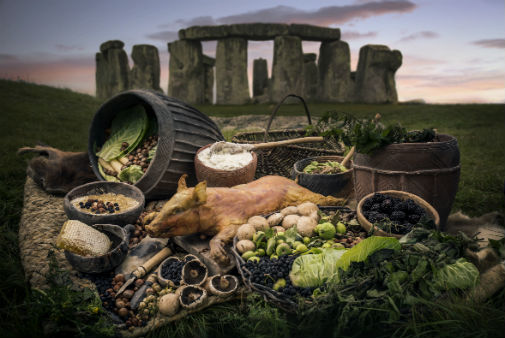 The exhibition, a partnership between English Heritage and the ‘Feeding Stonehenge’ project team at the Universities of York, Cardiff, Sheffield, and University College London (UCL), invites visitors to explore the diet and lifestyle of the people that built Stonehenge and the culture, rituals and identity of food in prehistory.

Professor Oliver Craig, from the University of York’s Department of Archaeology, said: “We believe that the builders of Stonehenge settled in nearby Durrington Walls in the 25th century BC. Excavations of this site have revealed masses of food waste, stone tools and pottery.

“Whilst we already had a fairly good idea of what people ate during this period, this new evidence tells us how food was prepared and consumed, from large organised feasts, installations for roasting meat to smaller household practices.”

“Overall, the culinary organisation of this community was surprising for this period of prehistory and we hope that visitors to this new exhibition will be as fascinated by Stone Age cuisine as we have been researching it.”

Within the elaborate feasting ceremonies, milk played an important symbolic role; as the builders of Stonehenge were lactose intolerant, they had to turn the milk into cheese and yoghurt in order to consume it.

Pots deposited in residential areas were found to be used for cooking animal products including pork, beef and dairy, whereas pottery from the ceremonial spaces was used predominantly for dairy.

Dr Penny Bickle, from the University of York’s Department of Archaeologysaid: “Dairy seems to have played an important ceremonial role in this community, rather than being an everyday foodstuff.  In the exhibition we explore intolerance to milk in the Neolithic and the technologies the builders of Stonehenge used to turn milk in to cheese and yogurt, so it could be consumed.”

Isotope analysis of hundreds of pig and cattle teeth, by the University of Sheffield,  also revealed that human ancestors were bringing some of animals from as far as 500 miles away, suggesting that Stonehenge was known right across Britain and that people travelled far to help build the monument – and to take part in the midwinter feasts.

Highlights from Feast! Food at Stonehenge also includes a near complete and elaborately decorated Grooved Ware pot used in the preparation of pork and beef dishes and the skull of an aurochs, a now extinct species of wild cattle with large curved horns.

Susan Greaney, English Heritage historian, said: “Our exhibition explores the important role feasts and food played at Stonehenge. Raising the ancient stones was an incredible feat but so too was feeding the army of builders – our exhibition reveals just how this was done.”

The exhibition also aims to demonstrate some of the forensic science behind these recent discoveries in a project that was funded by the Arts and Humanities Research Council and wider outreach is planned in 2018 from schools to national music festivals.

Feast! Food at Stonehenge opens to the public on 20 October 2017 and runs until September 2018.