"Torpel Manor: The Biography of a Landscape" covers archaeological investigations of the Saxon, Viking, and medieval periods. 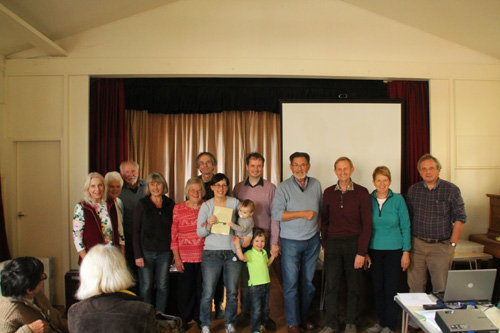 Last weekend, Steve Ashby and Aleks McClain were in Helpston, near Peterborough, for the launch of their book on the archaeology and history of Torpel Manor. Helpston is famously the home village of John Clare, England's greatest rural poet. But it has a much longer history, and lies in a part of the English landscape that buzzed with activity throughout the Saxon, Viking, and medieval periods. On the edge of the village lies Torpel Manor Field, a scheduled monument that appears to date back to around the time of the Norman Conquest, but has, until relatively recently, experienced very little research.

Since 2012, Steve and Aleks have worked with a number of members of the department past and present (including Helen Goodchild, Neil Gevaux, Hayley Saul, Michael Fradley, Robbin van Splunder, and Chen-Jyun Chiou) to explore the site through a programme of earthwork and geophysical survey. However, it has really been made possible through collaboration with members of the local community. Led by Michael Clatworthy, a programme of fieldwalking and testpitting in the surrounding area has allowed the work to be placed in its broader landscape context, while Frieda Gosling has organised a team of archive researchers to explore the site's interesting and complex documentary history. Expertise in geology (Martin Bradshaw) and prehistoric and Roman archaeology (Stephen Upex) has also been conveniently close at hand, making this a genuinely community-led project.

The work has been supported by a combination of the Heritage Lottery Fund, the Langdyke Countryside Trust, and an enormous amount of local goodwill.

The result is Torpel Manor: The Biography of a Landscape.
Copies of the volume are available from Steve Ashby (steve.ashby@york.ac.uk).
We also have a website, now live at www.torpel.com, and the archaeological data is archived at http://archaeologydataservice.ac.uk/archives/view/torpel_hlf_2016/