Abdullah was recognised for his PhD research (York, awarded 2014) entitled: ‘Mining in al-Baha region, south-western Saudi Arabia in the Islamic Era: the Archaeology of Asham’, supervised by Steve Roskams and Prof. Geoff Bailey, and Khalid for his Masters thesis (King Saud University) on the Neolithic site of Al Uuyannah in Tabuk, NW Saudi Arabia, research he is continuing during his PhD at York, supervised by Geoff and Dr Penny Bickle. Both presented papers on their research at the convention, in addition to chairing sessions on studying abroad and Arabian prehistory.

The awards were named after Abdul Rahman Al-Ansari, a pioneer of archaeology in Saudi Arabia, and the first Saudi to study archaeology at the University of Leeds. He went on to supervise generations of Saudi archaeologists, and led various archaeological surveys and explorations in different regions of the Kingdom for more than half a century.

The awards were the highlight of a spectacular convention that included research papers, high-profile discussion forums, and a 50-day programme of exhibitions and public events. York, with its longstanding collaboration with the SCTH was well-represented during the conference in addition to Abdullah and Khalid’s roles, with Geoff and Dr Robyn Inglis also presenting results of their ongoing work on the DISPERSE and SURFACE projects.

Media coverage of the conference can be found here and here. 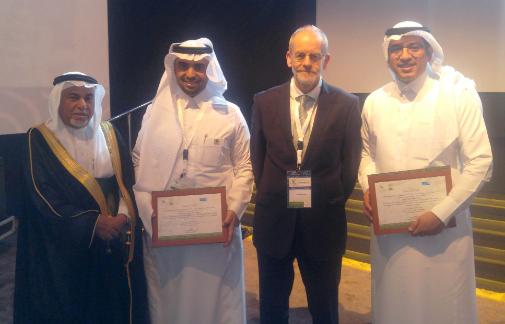