A large handaxe from Wadi Dabsa

York archaeologists involved in the discovery of a Palaeolithic tool 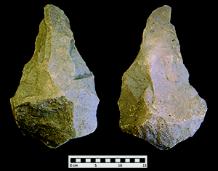 Two York archaeologists have contributed to a paper focussing on a large handaxe that was discovered alongside an assemblage of over 1000 lithic artefacts from the Arabian peninsula.

Dr Robyn Inglis and Professor Geoff Bailey, from the Department of Archaeology, were part of a team that discovered the handaxe during a survey in 2015 at Wadi Dabsa, in south-western Saudi Arabia.

The paper, published in Antiquity, discusses the wider role played by the Arabian Peninsula in hominin dispersals out of Africa, with the DISPERSE project concentrating on south-western Arabia as a possible centre of hominin settlement and a primary stepping-stone for such dispersals.

Handaxes are stone tools which are known as early as 1.8 million years ago, and whose appearance in the archaeological record marks the start of the Lower Palaeolithic period known as the Acheulean, although they persist into the Middle Palaeolithic (300-40,000 years ago).

The Wadi Dabsa handaxe was unusually large, leading the authors of the paper to argue that it may have been used as a kind of static tool, with meat and bone being smashed against it.