Last week, Julian Richards and Steve Ashby were among a group of invited delegates to the 18th Viking Congress, held this year at Copenhagen and Ribe, Denmark.  Julian presented recent work with metal-detectorists at Cottam, the first identified Viking-Age farmstead in England, and discussed its implications for tracking the movements of the Viking Great Army. Steve presented the first isotopic results from his Melting Pot project, which is analysing pottery to better understand Viking-Age food and cooking. Steve also used the opportunity to pick up some pottery from Ribe itself, Scandinavia's first viking town. 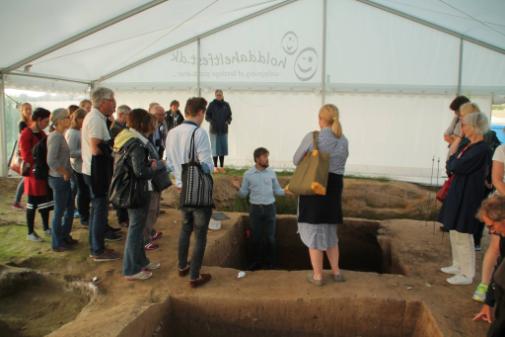 Highlights of the trip included visits to new excavations in Ribe's marketplace, and at the recently discovered viking fortress of Borgring (discovered with the help of our own Dr Helen Goodchild). In the photo above, ex-York lecturer and frequent collaborator Prof Soren Sindbaek talks us through the exciting excavations at Borgring.