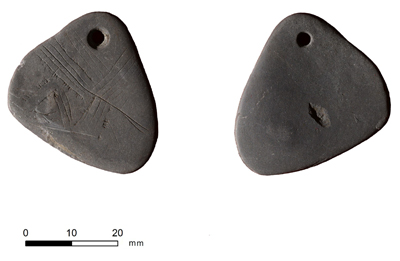 An 11,000 year old engraved shale pendant discovered by archaeologists during excavations at the Early Mesolithic site at Star Carr in North Yorkshire is unique in the UK, according to new research.

The artwork on the tiny fragile pendant, uncovered by a research team from the Universities of York, Manchester and Chester, is the earliest known Mesolithic art in Britain. Crafted from a single piece of shale, the subtriangular three-millimetre thick artefact measuring 31mm by 35mm contains a series of lines which archaeologists believe may represent a tree, a map, a leaf or even tally marks.

Engraved motifs on Mesolithic pendants are extremely rare and no other engraved pendants made of shale are known in Europe.

The research, which is part of a five-year project supported by the European Research Council, is published in Internet Archaeology http://dx.doi.org/10.11141/ia.40.8. The research is also supported by Historic England and the Vale of Pickering Research Trust.

The pendant is to be showcased to the public for the first time in a display at the Yorkshire Museum in York on 27 February until 5 May.