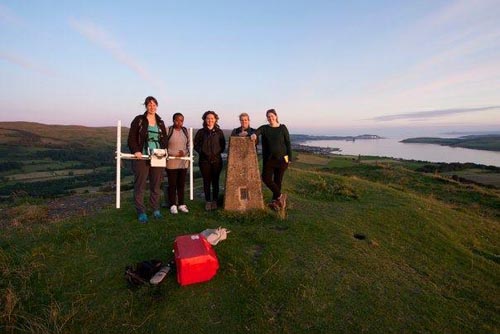 Hilltops defended by ditched and banked earthworks, sometimes augmented with masonry walls, are common features of Iron Age Europe, but it remains unknown why the defences of many examples were deliberately vitrified by subjecting them to intense and prolonged heat. Although examples exist in mainland Europe, Ireland and England, by far the highest concentration are in Scotland, and indeed until recently these were thought to be an exclusively Scottish phenomenon.

The SIAVH Project (Scottish Iron Age Vitrified Hillfort Project), based at University of York will conduct archaeological investigation centred on The Knock vitrified Iron Age hill fort, Largs, Scotland. The research brings together the application of stratigraphic excavation, microscopic and multi-element soil analysis techniques to prehistoric Iron Age hill forts. The investigation will identify the materials and methods used in the vitrification of Iron Age hill forts, while determining the impact such large scale resource use had on the landscape and the human inhabitant.

The main research questions of this project are defined as follows:

The project has already surveyed, the site under the supervision of Dr Helen Goodchild (Aug 2015) and is now embarking of the excavation across the southern vitrified ramparts (7-14th May 2016).

SIAVH was featured in the Largs local news: