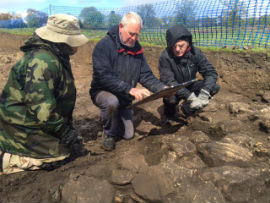 A group of military personnel and veterans, including those injured in Afghanistan and other operations, are taking part in a unique project which uses archaeology to help assist with their recovery.

Operation Nightingale is an initiative to help rehabilitate injured service personnel recently returned from operations by getting them involved in archaeological investigations.

The project will see members from all three Armed Services excavate a Roman fort and settlement at Old Malton, North Yorkshire, under the watchful eye of archaeologists from the University of York.

The service personnel, who have both physical and mental health injuries, will be introduced to the skills of excavation, survey, drawing and artefact handling and recording.

It is a joint project between the University of York, the Malton Estate, York St John University, Historic England and the Defence Archaeology Group (DAG).

The project offers veterans, serving military personnel and family members a chance to build a new and supportive community in the present by excavating the past.

The fort is of significant archaeological and cultural importance, which could yet unearth some vital clues to our Roman past.

Work will focus on an area east of the Roman fort at Malton.

Its development is understood only in outline, based on excavations which took place some decades ago. Initial excavations were undertaken in the 1930s, exposing parts of the fort defences and some interior buildings.

Steve Roskams from the University of York’s Department of Archaeology said: “The University is delighted to be involved in this project; which not only expands our understanding of the archaeology at the fort but also helps support injured personnel.

“It also allows us to help the local community to explore and engage with the heritage that exists all-around them.

Sgt Diarmaid Walshe, Project Manager, Defence Archaeology Group and a qualified archaeologist, added: “It’s helping to build links with the local community and also engaging with elements of the local population we normally have no interaction with.”

“The project helps those taking part rebuild their self-esteem, provide them with a sense of purpose and give them something positive to strive for.”

A spokesman for the Malton Estate said: “We are delighted to support this project, which not only brings benefit to the local community, but also helps our military personnel recover from injuries suffered during service for this country.”