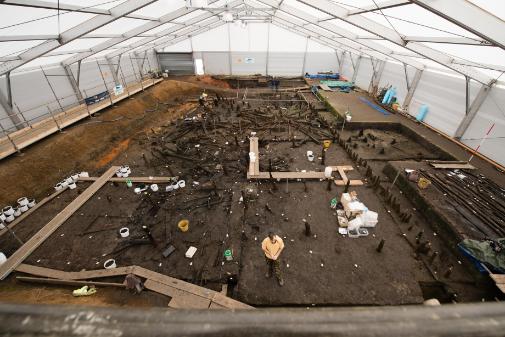 An archaeologist from the University of York has featured in a BBC Four broadcast about the discovery of an important Bronze Age site.

Must Farm, near Peterborough in Cambridgeshire, contains the remains of part of a settlement dating from c.1000-800 BCE. Extrordinarily well preserved waterlogged deposits include house platforms, boats, bronze tools and textiles, and have led to the site being named as "Britain's Pompeii".

Mike Bamforth, who is also Project Manager for the POSTGLACIAL project, is a specialist in wetland archaeology and prehistoric woodworking, and has played a significant role in the discovery and interpretation of the site.

You can watch the TV programme on BBC's iPlayer here: http://www.bbc.co.uk/iplayer/episode/b07myxws/britains-pompeii-a-village-lost-in-time.

To find out more about the site, visit Must Farm's website: http://www.mustfarm.com/.