Star Carr on Digging for Britain 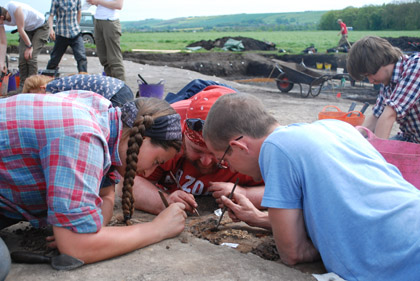 Star Carr was featured on BBC4 Digging for Britain this week. It showed our students excavating during fieldschool last summer, the discovery of the headdresses, and the pendant. The onsite footage was filmed by the team, and in particular by Ben Elliott, Harry Robson, Charlie Rowley and Mike Bamforth. The team were encouraged to film most days and keep a 'dig diary' which was then sent to the production company for editing.

One of the headdresses was then taken to the Yorkshire Museum so that their curator, Natalie McCaul, could show Alice Roberts what it looked like close up. They then asked Nicky Milner to take the pendant to London for further filming in the studio.

The pendant is currently on display at the Yorkshire Museum until the 5th May. Our newly found headdresses will also go on display at the Yorkshire Museum once they have been conserved, probably by the end of the year. Other examples of headdresses can be seen at the British Museum, The Rotunda Museum in Scarborough and the Museum of Archaeology and Anthropology in Cambridge.

To read more about the pendant, an article has been published in Internet Archaeology: http://dx.doi.org/10.11141/ia.40.8