Scientists have identified fossil proteins in a 3.8 million year-old ostrich eggshell, suggesting that proteins could provide valuable new insights into the evolutionary tree, much further back in time than was previously thought. 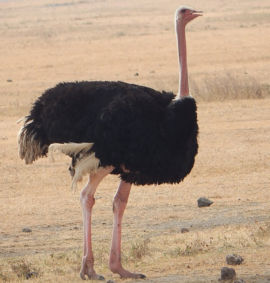 The study, published in the journal eLife, suggests that survival of protein fragments in the ancient eggshell could provide genetic information almost 50 times older than any DNA record.

The findings shed new light on how animals and humans lived and interacted in the past, how some species became extinct, and why some evolved and continue to thrive today. Crucially, the research provides archaeologists with the ability to be more targeted in which fossils they submit for deeper analysis.

The team at the Universities of York, Sheffield and Copenhagen analysed and tracked egg fossils from well-dated sites in Tanzania and South Africa, where it is expected DNA and proteins would not survive the extreme environmental conditions.

Professor Matthew Collins, from the University of York’s Department of Archaeology, who led the team, said: “To date, DNA analysis from frozen sediments has been able to reach back to about 700,000 years ago, but human evolution left most of its traces in Africa and the higher temperature there takes its toll on DNA preservation.

“We had known for many years that proteins could give more clues into the past, but when we looked at protein decay in eggshells, it gave us unusual results when compared to other fossil materials and, until now, we have not really known why.”

The researchers speculated that proteins might survive better if they were stuck onto solid surfaces, and so they tested the theory with the support of computational scientists at the University of Sheffield, who modelled the bindings of proteins in ostrich eggshells.

Dr Beatrice Demarchi, from the University of York’s Department of Archaeology, said “Evidence suggested that it was the more fluid, unstable, region of the protein that promoted and regulated mineral growth in the shell, but it was also less likely to survive over time and the intense heat of the African climate.

“As we examined older and older eggshells, we could see that this assumption was surprisingly wrong, as it was in fact the unstable regions that survived the best. They were able to bind more strongly to the eggshell, allowing it be preserved in time.”

Fragments of ancient ostrich eggshells are abundant in Africa, and often found at archaeological and palaeontological sites. They were exploited by the earliest modern humans as raw materials to make art, and jewellery and, or for carrying water. The shell is very thick and hardwearing and therefore survives under many different environmental conditions.

Dr Colin Freeman, from the University of Sheffield, said: “Remarkably, the oldest eggshell in the study - from the famous 3.8 million year-old site of Laetoli in Tanzania – a region of the protein was still there, giving us a unique insight into what to look for when analysing fossils of this kind.

“Now that we know minerals can trap and preserve proteins in this way, we can be much more targeted in our study of ancient remains.”

1. A selection of images from the research team can be found at: https://goo.gl/photos/vym2juAeEuhje3LRA