Oliver Craig on Cuisine Choices and Dining at Stonehenge 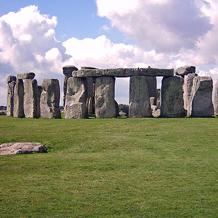 A team of archaeologists at the University of York have revealed new insights into cuisine choices and eating habits at Durrington Walls – a Late Neolithic monument and settlement site thought to be the residence for the builders of nearby Stonehenge during the 25th century BC.

Together with researchers at the University of Sheffield, detailed analysis of pottery and animal bones has uncovered evidence of organised feasts featuring barbeque-style roasting, and an unexpected pattern in how foods were distributed and shared across the site.

Chemically analysing food residues remaining on several hundred fragments of pottery, the York team found differences in the way pots were used. Pots deposited in residential areas were found to be used for cooking animal products including pork, beef and dairy, whereas pottery from the ceremonial spaces was used predominantly for dairy.

Dr Oliver Craig, Reader in Archaeological Science at the University of York and lead author on the paper, said: “Evidence of food-sharing and activity-zoning at Durrington Walls shows a greater degree of culinary organisation than was expected for this period of British prehistory. The inhabitants and many visitors to this site possessed a shared understanding of how foods should be prepared, consumed and disposed.  This, together with evidence of feasting, suggests Durrington Walls was a well-organised working community.”