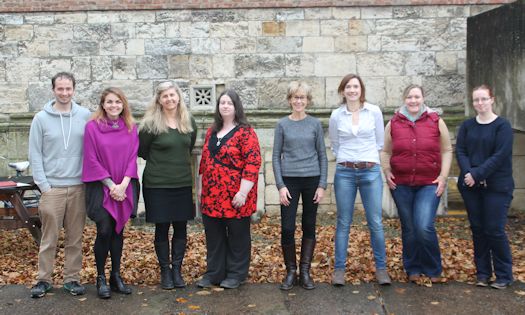 Two alumni of the Department of Archaeology, Dr Hayley Saul and Dr Emma Waterton (Western Sydney University), were caught in the Nepal earthquake of April 2015 while they were carrying out archaeology and heritage research in the Langtang Valley. They had only left the village of Langtang, described by the BBC as 'Nepal's worst hit', two hours before the earthquake struck. Incredibly, they managed to escape, thanks to the heroic actions of the guides and other local people, but tragically, many of these same people lost their homes, livelihoods, and families in the earthquake.
Almost immediately after being airlifted from the mountain, Hayley and Emma set up a Justgiving account to share their story and to raise money for the people of Langtang: www.justgiving.com/langtang-survivors. This fund is being administered by Community Action Nepal, a local charity already on the ground in Nepal, meaning that donations can go directly to where they are needed. CAN already has many restoration projects underway, and they are keeping us updated as things progress.
Inspired by Hayley and Emma's story, staff and students in the department worked together over the past year to raise money for this important cause. The Archaeology Society kindly donated part of the revenue from Summer Ball ticket sales, as well as organising their first Charity Fete this summer, with all proceeds going directly to the fund. The departmental office has taken in a large number of additional donations and many people have donated directly to the website. Also, several staff undertook the 'Langtang Marathon' over the summer, where they undertook to collectively cover the distance between York and Langtang (over 4000 miles) by running, cycling, and swimming. An intrepid few have since completed this task, and raised sponsorship donations from it.
Through their collective efforts, the Department of Archaeology has raised well over £1000 for the Justgiving fund, quite apart from individual donations made by members, and the fund as a whole now stands at almost $79,000. Please do donate if you haven't already done so; there is still much work to be done.