...the revelation that Neanderthals selectively picked and ate medicinal plants 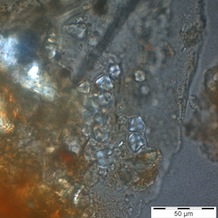 Archaeology Magazine has listed its top 10 discoveries of 2012, and one of them is the discovery from dental calculus of evidence that "Neanderthals inhaled wood smoke, probably from a campfire, and that they had eaten cooked plant foods as well as the bitter-tasting medicinal plants chamomile and yarrow" is one of them.

Prof Don Brothwell one of the authors on the paper said "It is wonderful that since our early work in the 1980's, research on Dental Calculus is now beginning to take off again.  In our early research we saw evidence of entrapped plant remains, but the new methods offer even greater level of detail".

The project lead by Karen Hardy from the Catalan Institution for Research and Advanced Studies, Universitat Autònoma de Barcelona in Spain and Stephen Buckley from York was published in Springer's flagship multidisciplinary science journal Naturwissenschaften.

Readers must agree it is the most downloaded article in the journal this year.