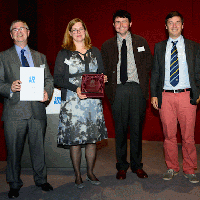 The Archaeology Data Service (ADS) has been successful in winning the prestigious British Archaeological Award (BAA) for Best Archaeological Innovation 2012. The winners were announced at a ceremony in the British Museum on Monday, 9 July and the award was accepted by Director Prof. Julian Richards.

The award was for ADS's work in making archaeological grey literature reports discoverable via geospatial search and referenceable via Digital Object Identifiers (DOI) as well as undertaking digital preservation of each report (currently around 18,000). The DOI element of the project has been carried out in association with the DataCite project at the British Library and the grey literature library itself is, in part, supported by English Heritage.