Remarkable rock art discovery at 2200m in the French Alps

During the summer of 2010, an important new rock art (prehistoric painting) panel in a rock shelter was discovered in the Ecrins National Park in the Southern French Alps. This enigmatic find was made by the Franco-British team (directed by Kevin Walsh from York, and Florence Mocci, from the CNRS in Aix-en-Provence) working on the Southern French Alps Landscape Project. Over the years, numerous prehistoric and historic sites have been found in the high altitude zone above 2000m, but the discovery of rock art in an area that has never yielded such a find is perhaps the most exciting find since this research started back in 1998. 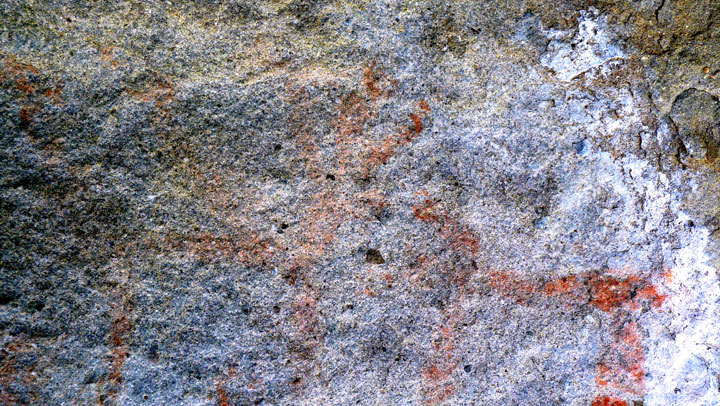 Close up of the painting - Deer (left) and possible dog (this section c. 40cm wide)

In certain areas of the Alps, Rock Art is common, although painting is rare. The two most famous zones are in the French Alpes-Maritimes (including Mont Bego) to the north of Nice, and the central and northern Italian Alps (Valcamonica). Our art was found within a rock shelter situated at 2200m, it is painted in red ochre, and covers an area of almost four square metres. The composition comprises a series of vertical, parallel lines and two animals facing one another, of which one is certainly a deer. Two oblique lines emanate from this animal’s back; possibly a spear…The second, smaller animal may well be a dog. The surface was prepared (pecked) before it was painted. The fact that this part of the valley has a great deal of Neolithic evidence, combined with dates assigned to similar artwork elsewhere in France and Italy, leads us to assign this art to the Neolithic, although engravings of deer and dogs exist in other parts of the Alps, and these are often considered to be Copper or Iron Age. Whatever the date, the importance of this find means that 2011 will see the excavation of this site.

Meanwhile, discretion regarding the location of the site is required in order to guarantee its preservation. The archaeological team, the national park and the regional archaeology service have spent several months discussing measures for the protection of the site; thus the delay in reporting its discovery.  Up until now, these paintings have been relatively well protected from the natural elements. Despite this, certain parts are in a relatively poor condition; pieces of the rock surface may have already disappeared. A painted fragment was discovered on the ground. It is conceivable that other elements of rock art may have existed which, due to the nature  of the local geology, or their aspect, have been unable to resist these natural, destructive processes.

Needless to say that this site deserves the utmost respect and protection, and the Regional Archaeology Service and the National Park are working with the team to ensure this.

As mentioned above, the rock art was discovered during the highly successful 2010 field season in the Freissinières and Pelvoux areas of the Ecrins National Park, and a number of prehistoric flint scatters were discovered, including a Neolithic flint arrowhead at 2475 m. 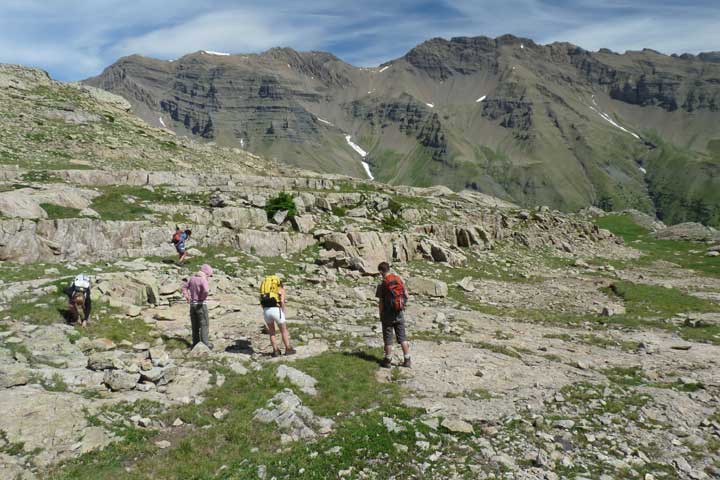 Archaeological prospection taking place at c. 2500m in the Ecrins National Park where the highest arrowhead in the French Alps (possibly in the entire Alpine arc) was found 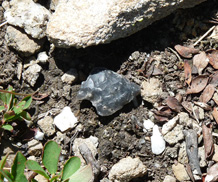 The arrowhead
Link to article in the Dauphine libre (French Newspaper)