The department honours one of the UK’s leading landscape archaeologists and a pioneer of computing applications in archaeology. 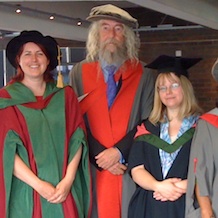 Dominic Powlesland has been deeply committed to archaeology ever since he joined a local excavation in Colchester at the age of 11. By the age of 16, he was engaged on projects in Winchester, and, soon after, here in York.  After several years at the University of Manchester, he moved back to Yorkshire to undertake a small rescue excavation at West Heslerton in the Vale of Pickering. From these small beginnings, Dominic has gone on to establish himself as one of Britain’s most influential archaeologists.

As Director of the Landscape Research Centre, he has run an extended programme of survey and excavation in the Vale of Pickering at West Heslerton. This programme has revolutionised the understanding of prehistoric to early medieval period settlement patterns and is widely regarded as one of the most important landscape archaeology projects in Europe.  Running now for more than 30 years, the Heslerton project has no parallels anywhere else in Britain and, indeed, the world. From the outset, its aim has been simple and incredibly bold; to take an entire landscape apart. Through the innovative integration of aerial photography, remote sensing and excavation, the project has been tracking the area from prehistory to the present, exploring how people lived and how the pattern of their lives was entangled in broader historical processes. There was no map, no existing model, for a project like this.

Dominic and his small team had to develop an entirely original approach and it is telling that much of what they established; from the use of large scale geophysics to the development of original analytical software, has now been widely adopted by many agencies around the world. It is also entirely fitting that a project which shifts back and forth between the intimate details of a grave and patterns only visible from the air, is now available on Google Earth, where the data are being made freely open to all. It is, quite simply, a remarkable piece of work, giving us one of the best studied and understood archaeological landscapes in the world, with results that provide lessons from which all of us can learn.

What makes Dominic's work all the more remarkable is that it has been as much about the contemporary landscape as the past. For over 30 years, and long before it became fashionable, he has taken great pains to involve local communities, and to bridge the unhelpful gap between commercially funded archaeology and academic research.