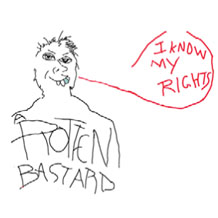 Archaeologists typically record and analyse the traces of past human activities. The caves of Lascaux in southern France are celebrated as a place where early humans made their marks on cave walls. The cave is now protected, and an exact replica is what the public now encounter.

But a new study by archaeologists has been examining marks made much more recently – graffiti by the Sex Pistols now discovered on the walls of the flat the punk group rented in London in the mid-1970s. The authors of a paper in the latest issue of the journal Antiquity argue that both are pieces of art and both lend themselves to archaeological investigation.

Dr John Schofield, of the Department of Archaeology at the University of York, and independent researcher Dr Paul Graves-Brown, suggest that the intact Sex Pistols graffiti may be of greater significance than the discovery of early Beatles recordings. They say the graffiti found behind cupboards in the property in Denmark Street in London is “a direct and powerful representation of a radical and dramatic movement of rebellion.”

The researchers carried out a detailed analysis of the graffiti’s content and its cultural significance. Though they concede it could be considered rude, offensive and uncomfortable, they contend that its presence confirms the Denmark Street flat as an important historical and archaeological site in a street known as London’s ‘Tin Pan Alley’.

Their findings appear in the latest issue of Antiquity – less than a fortnight before the 35th anniversary of the day the Sex Pistols earned national notoriety by swearing on prime-time television.

For more details see the University Press Release and also check out John's Varmit's column where there are tracks to listen to, and a report on BBC NEWS Entertainment and Arts.