Postdoctoral Research Associate Michael Stratigos considers the importance of knowing where to plant trees versus where to reinstate and promote the development of bogs.

A recent BBC news video has highlighted how cutting down trees could be a good thing for mitigating greenhouse gas emissions that contribute to anthropogenic climate change.

As the news piece suggests, this may come as a bit of surprise as tree growth is often pointed to as essential for carbon dioxide emission reduction. However, these particular trees were growing on a bog.

Bogs are permanently wet and the soil that forms here, peat, is composed of partially decomposed plant matter. Peat formation pulls carbon dioxide out of the air and locks it away for the long term (as long as it is not disturbed). There is now a very substantial body of evidence that shows that any net carbon dioxide reduction from the growth of trees planted on bogs is cancelled out and then some by the decay of peat that occurs because the trees are growing there (for example see this recent study). So in a drive to net zero carbon emissions, it is really important to know where to plant trees versus where to reinstate and promote the development of bogs.

However, and very fitting for the complicated and sometimes counterintuitive nature of the Anthropocene, the idea that trees do not belong in or on bogs is not universally the case. In the tropics, peat forms in massively biodiverse forests. In temperate regions, like the UK and Ireland, many tree species like birch, alder, hazel and willow, thrive in the wet areas surrounding bogs. The wooded edges of rain fed bogs are some of the rarest and most species rich wetland environments known in the UK or Ireland. Some bogs, like the blanket bogs of north-west Scotland, now cover what was, at different times, a large forest of Scots pine. As the climate fluctuated between wetter and drier conditions, blanket bog expanded claiming the trees and preserving their fallen trunks and stumps. Different levels of pastoral activity since as early as 4000 BC has ensured that the trees have struggled to re-colonise in drier periods since. The same trees preserved in these bogs have stored that information in their tree rings which can be analysed and studied (for example this group indicating a shift to wetter climate around 3000 BC). Similar stories have been identified elsewhere in the UK, Ireland and across northern Europe. 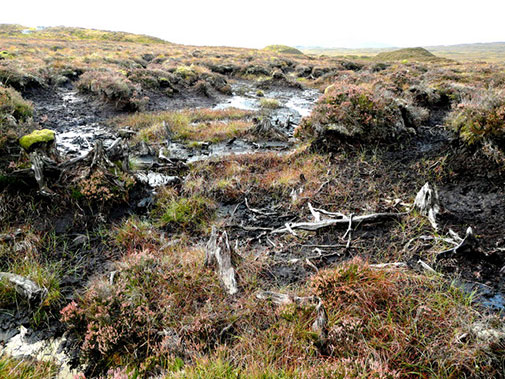 Pine stumps emerging from peat hags on Rannoch Moor, Scotland. These pines may be as much as 8000 years old. CC BY-SA Alistair G.

This more complicated picture poses an interesting challenge for bog restoration. What precisely is the aim of the restoration? It is clear that it is not helpful for climate change or biodiversity to grow monocrop conifer plantation (like those being cut down in the BBC link) on bogs or even on non-bog soils with high organic content (although, there’s always an exception, for example, the conservation of red squirrels in Scotland). There is not really a state of perfectly ‘natural’ (in the sense there has been no human impact) bog environment in the UK and Ireland to go back to - humans have been living in, exploiting and impacting bog and other wetland environments very soon after they became ice free at the end of the last Ice Age from now drowned coastal margins (for example at Bouldnor Cliff just off the Isle of Wight) to the highest uplands (for example at 400-500 m above sea level in the Cairngorms 10,000 years ago).

While changes to bog environments caused by shifts in climate and human activity in the distant past are hugely important for insights into the trajectories of these environments, the overwhelming reason for the current distribution of different bog environments is more recent drainage. Draining bogs in the past 300-500 years, almost always for agricultural purposes (and sometimes for public health - these environments rightly and wrongly have long held associations with diseases like malaria), has impacted almost every square metre of wetland environment in the UK and Ireland. We can get a sense, or even a quantified assessment, of just how pervasive wetland drainage was through analysis of historic documents, like maps such as the Bog Commission Maps of Ireland (1809-1814) or the Roy Military Survey of Scotland (1747-1755) both of which show vast bogs and other wetland which have been drained since they were produced. The size and location, biodiversity and carbon sequestration potential of bogs in the UK and Ireland is now mostly a question of historic land-use practices, not one mostly of geology and ecology. 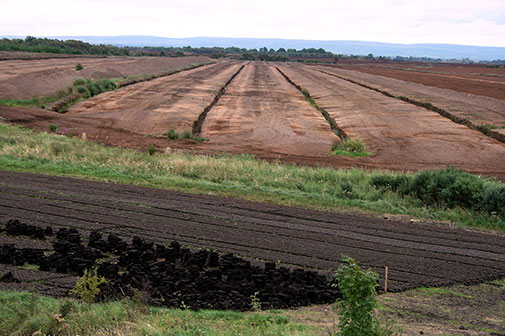 The Bog of Allen, Co Offaly, Ireland was industrially harvested for peat through the 20th century. These cut bogs were then often targeted for conifer afforestation and now for restoration. CC BY-SA Sarah777.

You can see what the Bog of Allen may have looked like before it was fully drained on one of the Bog Commission’s maps.

In this sense, the restoration of bogs and other peatlands can be seen as the next big change in human land-use of bogs. We are changing (or restoring) these environments to promote things we like, carbon sequestration, biodiversity or hydrological conditions. Perhaps more in tune with the way these environments would behave without heavy anthropogenic influence, it is important to keep in mind that even restored bogs remain deeply Anthropocene.

If the complexities of human-environment interactions in bogs is of interest, an evening of discussion on bogs in south-west Scotland is being hosted by the Galloway Glens on 28 April 2021, from 19:30 to 21:30, as part of the Peatland Connections project. Tickets are free, but registration is required. Get tickets here.