Dr Sarah Bezan, LCAB postdoctoral researcher, explores how the category of “endling taxidermy” has emerged in the wake of the sixth mass extinction.

What is it that we see, or fail to see, of the mass extinction of species? In the present era, species loss often evades full comprehension due to its global scale and complexity. Scientists at The Center for Biological Diversity, for instance, estimate that “we’re now losing species at 1,000 to 10,000 times the background rate, with literally dozens [of species] going extinct every day.” Beyond the precincts of conservation science, these background extinctions often persist without being registered, and therefore properly accounted for, by the rest of human society. But what if this process could be made tangible and visible, at least in part? What would it mean to preserve and monumentalize an extinct species?

Enter the endling. Defined by historian Dolly Jørgensen (University of Stavanger) as the “last individual of a species,” the endling has infiltrated our field of vision in recent years. An article by Michelle Nijhuis in The New Yorker (2017) catalogues this emergence of the endling through a visual illustration by artist Bjørn Lie that features well-known endlings like Celia (the last Pyrenean Ibex), Toughie (the last Rabbs’ fringe-limbed treefrog), and Orange Band (the last Dusky Seaside sparrow). Artists and authors, as Jørgensen explains, are creatively engaging with the endling in order to grapple with the meaning of anthropogenic (or human-influenced) extinction.

But despite this visibility of the endling, scientists and cultural theorists alike have not yet fully explored or elucidated the role of taxidermy in preserving endling bodies. While taxidermy forms like Martha are no longer on display (the specimen now lies in storage at the Smithsonian Institution Archives), other endlings, notably Lonesome George — the last Pinta Island tortoise — are available to the public for viewing. Following his death on 24 June 2012, the post-mortem presence of Lonesome George at the Charles Darwin Research Station on Santa Cruz Island in the Galápagos offers us a unique case study for the emerging phenomenon of endling taxidermy, in turn widening the scope of our analysis of endling representations and their relationship to conservation science programmes that aim to mobilize a call for the protection of species across the globe.

An Environmental History of the Galápagos: The Pinta Island Tortoise

Contextualizing the taxidermic preservation and display of Lonesome George within nautical and natural histories of the Galápagos, my approach to endling taxidermy has focused on how conservation scientists and museum curators at the Charles Darwin Research Station construct visual narratives of species loss. This project, which began with two weeks of field work in the Galápagos during the summer of 2018, offered me the opportunity to consider how the endling taxidermy of Lonesome George might enrich (and potentially complicate) our understanding of the environmental histories and futures of the Galápagos Islands, and in particular the role of human activity in creating the conditions for species extinction.

The Charles Darwin Research Station’s Path of the Tortoise (pictured below) briefly outlines this environmental history, which begins with the arrival of sailors and buccaneers in the seventeenth century. From this point forward, the story of tortoise extinction is accelerated by the introduction of invasive species, including blackberry bushes, giant African snails, parasitic flies, rats, and goats that wiped out native habitats. Over the course of the next several centuries, crews of whaling ships and natural scientific expeditions (notably Charles Darwin’s visit on the HMS Beagle in 1835, which included the consumption of tortoises in all manner of soups and stews) also decimated tortoise populations. The Galápagos Conservancy, a U.S.-based nonprofit organization, claims that during this period approximately 100,000-200,000 tortoises were removed from the Islands, with an estimated 20,000-25,000 tortoises remaining today. 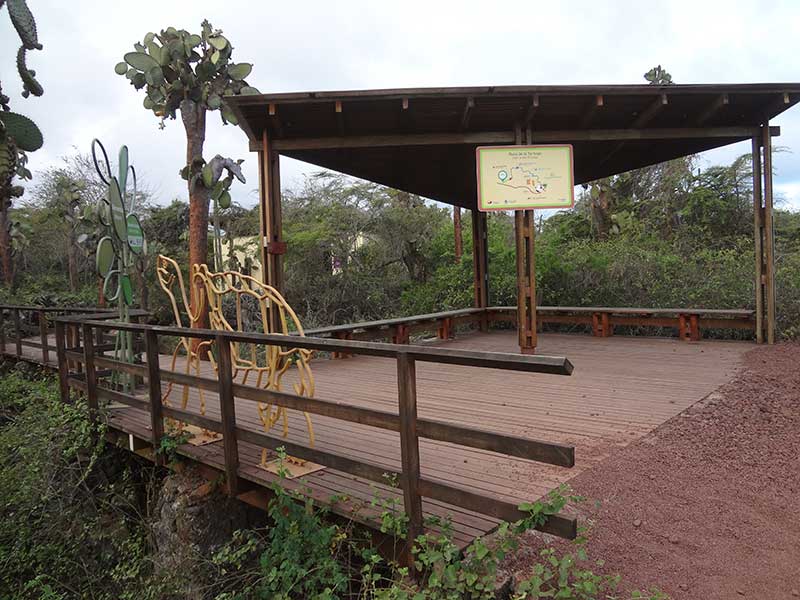 The fate of the Pinta Island tortoise in particular was already uncertain by the time conservation scientists from the California Academy of Sciences (CAS) arrived aboard the Academy in 1905-1906. R.H. Beck and Joseph Slevin, two members of the CAS expedition, systematically scoured the Islands for specimens, and discovered three male Pinta Island tortoises there. In an act that can only be described as an allegiance to an aggressive conservationist agenda, Beck and Slevin butchered and preserved each of these tortoises as taxidermy mounts, documenting their biometrics in a volume that was later published as Race With Extinction: Herpetological Notes of J.R. Slevin’s Journey to the Galapagos, 1905-1906. These final three male tortoises were, as evolutionary geneticist Gisella Caccone (Yale University) confirms, some of the last remaining relatives of Lonesome George.

In the latest chapter of the environmental history of the Pinta Island tortoise, approximately 200,000 feral goats on the Islands have been eradicated following a targeted culling programme. In place of the goats that had destroyed vegetation on Pinta Island, thirty-nine sterilized tortoises of mixed heritage (the result of interbreeding between Galápagos tortoise species) were placed on the island to serve as ecosystem bioengineers. These designated “lawnmower” tortoises operate as placeholders, preserving the habitat while other tortoises with significantly higher percentages of Pinta Island tortoise DNA are propagated through back-breeding initiatives. This programme, coupled with the slaughter of Pinta Island tortoises by the CAS, exemplifies what has historically been a part of the internal conflict of conservation science, which often participates in a race to kill - and yet also to preserve - endangered and extinct animals.

The Path of the Tortoise, culminating in a stop at the Hall of Hope where the endling taxidermy of Lonesome George is on display, offers a space for reflecting on this environmental history, which reveals, at least at a basic level, how human activities have contributed to species loss. The Hall of Hope, a dim and sparsely furnished room devoid of informational signage or museum placards (pictured below) serves mainly as a kind of mausoleum. The display of the endling taxidermy of Lonesome George undoubtedly supports Jørgensen’s central claim that an endling captures the “permanence of group extinction on an individual level,” yet my visit to the Charles Darwin Research Station led me to also question how endling taxidermy addresses both present and future audiences. Posed and preserved for posterity, the taxidermic display of Lonesome George makes species loss palpable, but it doesn't reveal the post-mortem processes of preservation that an endling body enters into after death, nor does it reflect on how such preservations might extend the "life" of an extinct animal into the future. Given that naturalist taxidermy is committed to realism, what visitors don't see of the endling taxidermy of Lonesome George is the extent to which the bones and tissues of his body have been preserved, and for what purpose. As I argue in my article in Configurations: The Journal of Literature, Science, and Technology, these post-mortem processes (which include cryogenic preservation for potential future cloning) show us how endling taxidermy makes extinction visible, both now and for the foreseeable future. 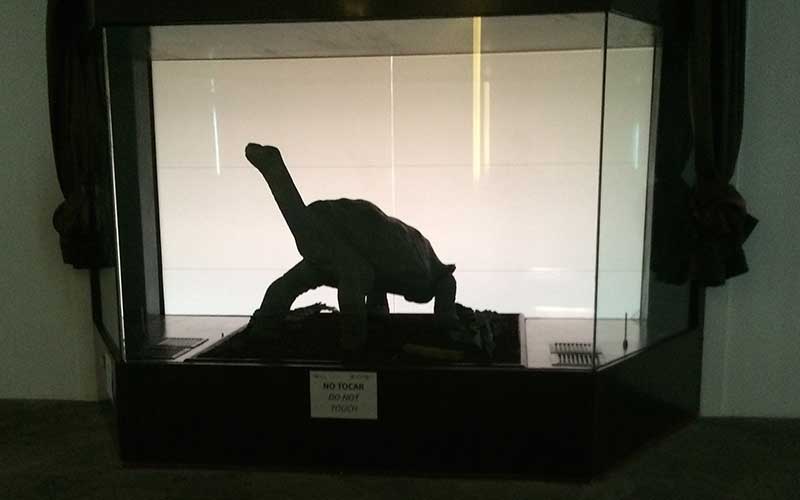 The Endling Taxidermy of Lonesome George

When Lonesome George was discovered in 1971 after decades spent in almost complete seclusion, his endling status meant that he would be protected for the entirety of his natural life. But in death, his endling body entered into a vast set of post-mortem processes, including a necroscopy performed by Marilyn Cruz (Galápagos Agrocalidad), taxidermy by George Dante (Wildlife Preservations, USA), genetic testing by Gisella Caccone (Yale University), and bone-cleaning by Richard Giegerich (The State University of New York). According to Linda Cayot, Science Advisor at the Galápagos Conservancy, frozen samples of Lonesome George were also cryogenically preserved at a storage facility in Tumbaco, on the mainland of Ecuador, for future cloning (though readers should note that de-extinction efforts for reptiles are still in very early stages of development).

These post-mortem processes, which indicate how the endling body of Lonesome George might preserve the biological history of the Pinta Island species and possibly extend it into the future through de-extinction programmes, are not detailed by the museum curators of the Charles Darwin Research Station. To some extent, then, the emptiness of the Hall of Hope leaves viewers without a frame of reference for comprehending the vacuity of species loss or considering how human mediation continues to affect extinct species as they become rendered into material archives in museums and scientific laboratories.

Ultimately, what I discovered during my research is that visualizing extinction through endling taxidermy can activate new pathways for reckoning with species loss on a global scale, but it also produces a conflicting sense of trepidation and optimism about the future of species biodiversity in the wake of the sixth mass extinction. My research has attempted to contextualize the function of endling taxidermy as not merely a locus of mourning, but as a specimen that demonstrates the continuing relationship between extinct animals and the conservation scientists who aim to protect other species from the same fate.

Bezan, Sarah. “The Endling Taxidermy of Lonesome George: Iconographies of Extinction at the End of the Line.” Configurations: A Journal of Literature, Science, and Technology, vol. 27, no. 2, 2019. Co-Edited by Sarah Bezan and Susan McHugh, Johns Hopkins University Press.

The field work for this research was supported by the British Academy in 2018-2019.

To learn more about this project, you can hear a podcast interview with the author on Knowing Animals, an award-winning open access podcast.

The field work for this research was supported by the British Academy in 2018-2019.

To learn more about this project, you can hear a podcast interview with the author on Knowing Animals, an award-winning open access podcast.