Air pollution: a dark cloud on the horizon

Scientists at the University of York are taking to the air to study the chemistry of air pollution that’s blowing in the wind.

Flying low over the Malaysian Borneo jungle in one of the specially-adapted planes used by the atmospheric chemistry team at York (image: Martin Irwin)

From the Malaysian jungle to the traffic clogged streets of London, Professor Alastair Lewis and the Department of Chemistry’s atmospheric chemistry team at York fly thousands of mile around the globe each year in hot pursuit of billowing ash clouds, pollutants and airborne particulates.

The atmospheric team’s missions have even extended to the outer reaches of space where satellites found evidence that carbon dioxide levels are increasing faster than expected in the upper atmosphere.

But it was a trip over vast palm oil plantations in the Malaysian jungle that really brought home the impact human activity can have on air quality.

“I was part of a study looking at the effect of palm oil plantations on ozone levels. Tropical forests are being destroyed to create the plantations, but it was only by flying above them that you could get an idea of the scale of what was being done. It was taking at least an hour to fly over some of these plantations. They were vast. And as soon as we left the plantations and crossed back into the rainforest again, isoprene, which is a key precursor to ozone, immediately dropped.

“At the end of the flight, we were all a bit slack-jawed at the scale of the man-made environmental change we had just witnessed,” he said. 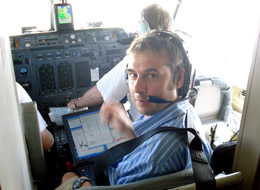 The team's globetrotting ventures aim to improve our understanding of the complex cocktail of chemicals that make up air pollution. They also aim to shed light on just how far pollution travels and the route it takes as it circles the planet with the help of air currents and weather patterns.

And the work shows that dark clouds are gathering...

“Air quality in London remains some of the worst in Europe and air pollution is recognised by doctors as one of the world’s top ten killers” says Professor Lewis.

Gases such as carbon monoxide, ozone and nitrogen dioxide as well as particulate air pollution from car exhausts get deep into the lungs and from there, can enter the bloodstream, causing problems for anyone suffering respiratory diseases, asthma or heart disease.

The UK is also facing significant fines imposed by the EU if it fails to meet air quality targets.

Professor Lewis explains: “Some pollutants are diminishing because we don’t have the same levels of harmful emissions from industry or power plants. Catalytic converters on cars have greatly helped clean up exhaust emissions and we don’t see ‘pea soup’ London smog like we used to.”

But research shows that while levels of some harmful emissions have dropped, others such as nitrogen dioxide and particulate matter are now levelling off with no sign of further improvements, despite continuing investments in emission controls.

Ironically, the best way to study what’s going on in our polluted atmosphere is from the air. Professor Lewis is a frequent flyer in specially adapted research aircraft packed full of sophisticated measuring and testing equipment capable of withstanding changing cabin pressure and aircraft vibration. His team spends hundreds of hours crisscrossing oceans, jungles and cities around the world hunched over graphs and figures that often make alarming reading.

“The equipment in the aircraft will often give us an immediate response so you get an instant picture of air quality,” explained Professor Lewis.

Work is underway on the University of York’s new dedicated laboratory building for atmospheric chemistry research, the first of its type in the UK.  Supported by a £1.25M grant from the Wolfson Foundation, the facility will combine global computer modelling facilities with laboratory science and instrument technology development.

“We might not have expected this over the centre of the city where there is little heavy industry and the congestion charge has reduced vehicle traffic. There’s obviously another issue influencing emissions. We’ve still to analyse the data, but we’re wondering if other transport sources such as trains could be a contributory factor.”

Air quality warnings are currently the front line of defence for vulnerable groups, highlighting pollution hot spots, especially during the summer months. Research led by Professor Lewis helped improve the accuracy of the warnings when he uncovered an unexpected link between hot summer weather and the formation of ozone, a serious potential health hazard. Measurements showed that in hot weather, plants emit a substance called isoprene which contributes to increased ozone, resulting in elevated air pollution.

“Poor air quality is expensive in terms of health and well being so making sure those at risk have accurate evidence-based information is important,” says Professor Lewis who received a Leverhulme Trust Award for his findings which resulted in a review of the methodology underpinning the Government’s air quality predictions.